We commit to strong and respectful relationships with our suppliers.

Our relationship with more than 15,000 suppliers across the Group is very important to us. This year we paid $45,525 million to our suppliers. We want to provide value to our customers and sustainable growth for our suppliers and their employees. Striving for better efficiency in our consumer supply chains ensures their continued competitiveness.

Coles is our largest consumer business and it continues to look for efficiencies in its supply chain. Coles' relationship with food and grocery suppliers in Australia continues to be the focus of some attention, and Coles is focused on strengthening these relationships to develop sustainable, long-term agreements with suppliers around Australia. 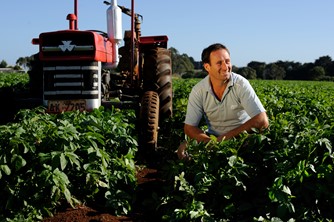 Deeper relationships with suppliers for Coles

Coles is continuing to develop longer and deeper relationships with suppliers. This gives greater certainty to suppliers to invest in their businesses and more opportunity for collaboration on quality, efficiencies and product innovation.

One ground-breaking example is the 10-year contract announced in December 2014 with Sundrop Tomatoes in South Australia for the supply of truss tomatoes. This contract will ensure year-round supply for customers, and has supported investment in highly innovative technology including a 20 hectare greenhouse facility at Port Augusta which grows tomatoes using solar power and sea water.

Since completing construction of the greenhouse in 2016, Sundrop Tomatoes has recruited more than 130 workers and will create an extra 200 jobs in peak periods.

In 2016, Coles allocated nearly $4 million in grants and interest-free loans from the Nurture Fund, with nine small businesses receiving assistance. Among the first recipients were:

Following a dramatic fall in world dairy prices caused by global oversupply, milk processors Murray Goulburn and Fonterra announced in May 2016 that they would retrospectively cut prices paid to farmers for their milk.

The retrospective price reductions led to widespread media coverage about what factors were to blame and Coles’ '$1 a litre' milk was brought into focus as part of the debate.

As a result, there was a reduction in sales of Coles’ $1 a litre milk and orders of branded milk were increased to meet the change in demand.

In response, Coles highlighted that:

Coles announced in May 2016 that it would support the dairy industry in southern Australia by working with farmer organisations to launch a new milk brand that would deliver 20 cents a litre to an independent industry fund.

Coles committed an initial $1 million to help establish the fund, which will support farmers in Victoria, Australian Capital Territory, New South Wales and Tasmania through direct financial assistance and grants to drive innovation and growth in the dairy industry.

The new milk brand is based on a similar concept that Coles supports in Western Australia and South Australia.

In South Australia, the state's peak dairy body, South Australian Dairyfarmers Association (SADA), reached a milestone in August 2015 when sales of its milk 'SADA Fresh' exceeded two million litres since its launch in October 2013. Since launching its milk brand at Coles, 20 cents a litre have been directed to a fund established by SADA, which is financing projects that help secure the future viability of the industry, benefiting local farmers and their communities.

One of the projects supported by the SADA Fund was a program to explore the benefits of using the latest variable-rate irrigation technology on South Australian dairy farms to reduce water and energy use, and improve production. Another SADA Fund project involved a major investment seminar to explore alternative sources of finance to help farmers expand their enterprises.

In Western Australia, the state's peak farmer organisation, WAFarmers, has sold more than 1.5 million litres of 'WAFarmersFirst' milk at around 90 Coles supermarkets since the brand was launched in November 2014. With 20 cents a litre from sales allocated to a fund managed by WAFarmers, the milk brand has paved the way for two new scholarships and a Dairy Ambassador program, which will be rolled out at the Perth Royal Show.

Since 2011, Coles brand suppliers have met specific sourcing requirements or been independently assessed to a higher animal welfare standard.

Coles is also extending these animal welfare requirements into other Coles brand products, for example, the Coles fresh sandwiches range includes sow stall free ham and RSPCA certified chicken, and its convenience meals have ‘no added hormone’ beef. To support these higher animal welfare initiatives Coles has incorporated these standards into the Coles Farm program. This year, Coles has made responsibly-sourced products more accessible and affordable to our customers.

Coles also continue to develop products in guidance with its no animal testing policy, verifying that all Coles brand food and non-food products do not test finished products on animals.

Food and Grocery Code of Conduct

Since 2013, Coles has been a leading voice in the development and implementation of a voluntary Food and Grocery Code of Conduct with the Australian Food and Grocery Council. Coles signed the code once it was ratified by Parliament and it came into effect from 1 July 2015. The voluntary code governs certain conduct between grocery retailers and wholesalers in their dealings with suppliers, including supply agreements, payments, termination of agreements and dispute resolution. The Australian Competition and Consumer Commission regulates the code which is prescribed under the Competition and Consumer Act 2010 (Cth).

Coles has taken many other steps to improve its relationships with suppliers including implementing a best practice compliance framework and the establishment of a Supplier Charter. It provides a strong, independent and confidential dispute resolution process underpinned by the Honourable Jeff Kennett AC as an independent arbiter.