We make a positive contribution to the communities in which we operate.

We have an impact on our communities in a variety of ways: meeting the basic needs of the community such as food, clothing and tools; providing employment for nearly one in every 60 working Australians or one in 17 working Australians under 20 years of age; paying taxes to governments; and providing support to not-for-profit organisations. With 96 per cent of our revenue earned in Australia and the vast majority of our shares held in Australia, we have a significant positive impact on the Australian economy, as well as contributing to other economies.

Wesfarmers has always believed that a strong business environment is underpinned by a cohesive and inclusive community environment. Accordingly, Wesfarmers has had a long-term commitment to investing in community initiatives linked to long-term social and economic outcomes.

In 2016, the Wesfarmers Group collectively contributed more than $57.8 million in direct funding to community organisations across Australia and New Zealand and other regions where we operate. The Group also facilitated donations from customers and employees totalling $53.8 million this year.

Contributing to the economy

Economic contribution to the community

Below is a summary of how we distribute the wealth we create.  Further detail on our financial performance for the year can be found in our 2016 annual report. 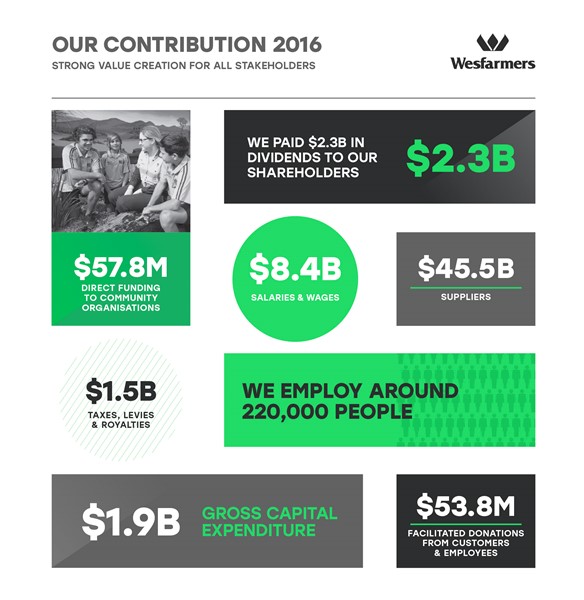 Directly and through support from our customers and team members, our community contributions exceeded $110M

Reflecting the divisional autonomy of the Group, our approach to community engagement is driven and managed by our businesses to ensure value is created in ways that best fit with their operations and geographic spread.

At a corporate level, the Wesfarmers Board approves partnerships focused on four areas: medical research and health; Indigenous programs, particularly targeting education and employment outcomes; community and education initiatives; and the Wesfarmers Arts program. The majority of these partnerships are long-term commitments with West Australian-based organisations.

In 2016, we renewed our partnership with Surf Life Saving WA by continuing to support the Wesfarmers Lifesaver Jetski teams. We also established a new partnership with Reconciliation WA, a commitment which builds on our other partnerships supporting Indigenous programs and reflects our ongoing commitment to closing the gap.

Financial and in-kind emergency relief support was provided by Wesfarmers and a number of its businesses to the West Australian communities of Esperance and Yarloop, who both suffered devastating bushfires over the 2015/16 summer.

Many of our divisions have major, long-term partnerships at a national level. However, a significant part of the contribution from our businesses is directed towards local community groups, either through financial or in-kind donations. For example, some of our retail businesses support local community groups by providing gift vouchers for use in their stores, or facilitate the collection of customer donations for local fundraising initiatives. The well-recognised Bunnings 'sausage sizzles' provide opportunities for different local community groups to fundraise for their cause. As a result of these locally-driven fundraising activities, there is a significant number of community programs supported across Australia, including environmental projects, education programs and mental health initiatives.

Further detail on our community contributions can be found in Our data.

Target engages at a local level

Wesfarmers has supported the arts in Australia for more than three decades, with long-term support of a wide range of premier performing and visual arts organisations as well as the ongoing development of The Wesfarmers Collection of Australian Art.

During the year, Luminous World: contemporary art from the Wesfarmers Collection embarked on the final leg of an extensive three-year national tour that saw the exhibition enjoyed by regional communities across Australia, from the Northern Territory to Tasmania. Luminous World completed its tour at the acclaimed historic National Art School in Sydney in February 2016. 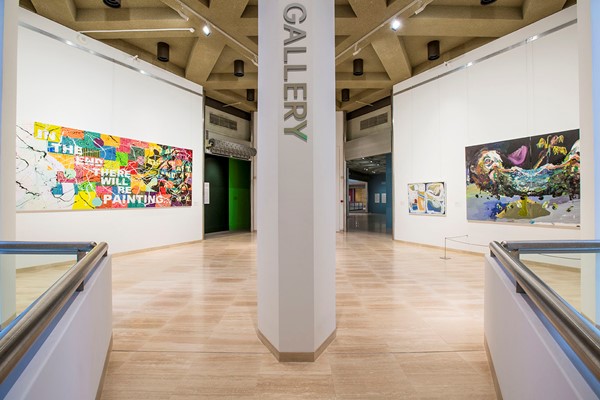 Wesfarmers Arts continued its major support of the performing arts in Western Australia as Principal Partner of West Australian Symphony Orchestra, West Australian Opera and the Art Gallery of Western Australia. In May 2016, we made a major donation to the Gallery to refurbish and upgrade rooms and open spaces formerly closed to the public. The new Sky and Garden Micro Galleries and Imagination Room now present changing displays of large-scale works from the Wesfarmers Collection and a dedicated area for education, family and artist events.

Another highlight of the year came with the announcement of Wesfarmers Arts as Principal Partner of the Australian Chamber Orchestra’s national regional touring ensemble ACO Collective, taking Wesfarmers long-standing support of the ACO to a new level from 2016. Led by Finnish violinist Pekka Kuusisto, this critically-acclaimed 17-piece string ensemble presents the ACO's regional touring and education programs Australia-wide, combining musicians of the ACO with Australia’s most talented young professional musicians at the outset of their careers.